Batteries are a basic but effective invention. A widespread misconception about how batteries work is that they contain a limited amount of electricity that is consumed after numerous uses. As a result, the battery dies. It is not even near to the reality of batteries and their energy production mechanism, as rational as it may appear. Here we will discuss some small life hacks on what to do with old laptop batteries.

You’ve most likely experienced the problem of the battery losing its ability to hold a charge if you’ve had a laptop for a while. Most people don’t realize that batteries work in a completely different way than they do. They function as a result of chemical reactions and the battery’s tendency to become neutral, balancing the positive and negative sides.

After a certain amount of chemical reaction has occurred in the battery, there is no longer any propensity for positive and negative charges to separate. The battery dies when the inclination dies.
In most circumstances, one or more of the battery pack’s cells deteriorate to the point that they can no longer be recharged, rendering the pack ineffective as a whole. At this point, you have two options: purchase a new replacement pack or wear your hardware hacking helmet and safety glasses and begin disassembling things.

Laptop battery recycling helps the environment in a variety of ways, including securely disposing of hazardous waste and recovering valuable resources for future use. Steel, cobalt, nickel, and polymers are among the metals and materials recovered from laptop battery trash for use in new goods.

Battery metals can be retrieved and utilized in other goods. Laptop batteries must be recycled since their extensive use has resulted in a slew of environmental issues, the most serious of which is hazardous heavy metal pollution from abandoned batteries in landfills. By recycling your old laptop batteries, you can help prevent these harmful goods from ending up in landfills.

Recovering these non-renewable resources eliminates the need to mine and process the same elements from the earth, which consumes far more energy than recycling finished metals. Cobalt and lithium are two materials needed to make batteries, and they are both in short supply as demand grows. So, whether it’s a double AA battery or a rechargeable battery that’s part of electrical equipment, it’s critical to recycle all batteries.

Batteries should not be disposed of in the trash. Batteries wind up in landfills when they are thrown away. Hazardous components from metals are released into the environment as they degrade, contributing to water and air pollution. Battery fires can occur if electrical devices are discarded with the batteries still inside. 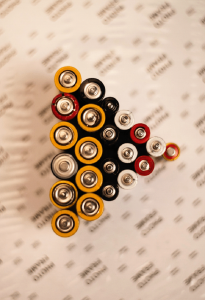 We’ll reiterate that 18650 batteries are NOT AA batteries and that working with them necessitates far more caution! A damaged 18650, in particular, might quickly short out, resulting in a lot of current flow, heat, fire, and other undesirable outcomes.

The first step consists of destroying the plastic core around the cells. For that, you need to push the two halves apart with the help of a slotted screwdriver and open it up completely with a little bit of muscle force. On the inside, you’ll mostly see up to 6 Lithium Ion cells with a capacity of 2.2 Amp-hours. Remove all the adhesive tapes, wires, ribbons, or sheets attached to the cells. Desolder all the wires on the cells from the control circuit and broke off the series connection of the three, two cells pack.

After that, measure the voltage with a voltmeter. “Good” 18650 cells have a voltage of 2.7V to 4.1V, whereas “poor” cells have a voltage of less than 2.7V. The batteries can be recharged. Arrange the cells in parallel and pack them together using Kapton tape. Use tab wires with a little bit of solder to connect all the cells in a parallel connection. Keep in mind that such an arrangement is only possible because they’ve always been used together and with a cell balance control.

Once the battery pack is complete, set the lab bench power supply to the advised charging voltage that is usually 4.2 volts but started the charging off with a low constant current of only 600 milli AMPs. After a couple of hours, you can increase it to 1 AMP to 2 AMPs which will charge the pack for roughly 4 hours without heating up during the process.

Check the batteries after 24 hours if they hold the charge well. The TP 4056 in combination with a micro-USB breakout will act as a charging and protection circuit for the batteries. In addition to that, the XI 6009 boost converters will step up the 3 to 4.2 volts of the batteries to 5 volts which is the standard voltage for a USB port. A connection board and toggle switches to turn on the 5-volt output, one green 5mm LED with 2.2 kilos Ohm resistor to showcase that the USB port is turned on, and finally two more LEDs which would tell you whether the charging process is complete.

Start to wire the batteries by using 0.75 sq mm solid wire to create the charging circuitry. Afterward, hook up the switch, the boost converter, the USB port, and a green LED to the output of the boost converter and finally replace the two SMD LEDs on the TPD 4056 board with regular ones. The top solder pad is positive and the one below is negative.

Once you’ve made sure that the constellation of parts works the way it is supposed to, house it all in a decent case. Mark and cut out the desired holes for the USB ports, the LEDs, and the switch using a drill. Also, create a mounting hole for the boost converter. Now secure the components into the case using hot glue and finish this build by securing the boost converter to the side.

Now you have a useful and small power bank that lasts up to 4-5 hours of battery made from a used laptop battery. 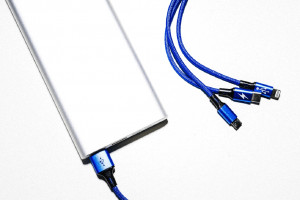 The first step is to demolish the plastic core that surrounds the cells. To do so, use a slotted screwdriver to push the two parts apart, then use a little muscle strain to open it completely. On the inside, you’ll find up to 6 Lithium Ion cells with a 2.2 Amp-hour capacity. Remove any tapes, wires, ribbons, or sheets that are attached to the cells. Desolder all of the wires on the cells from the control circuit and disconnect the three, two-cell pack’s series connection.

After that, use a voltmeter to check the voltage. 18650 cells with a voltage of 2.7V to 4.1V are considered “good,” while those with a voltage of less than 2.7V are considered “bad.”
You’d only need 2 battery cells to create a small LED light at home. Connect two good battery cells and connect two connection wires on the negative end of the cells using a solder gun. Glue a foam piece at the negative end to increase the height. Bring the wires towards the other end and secure them in place. Cut off the excess wire.

Glue a piece of charger connector and solder the diode to charging positive. Connect a small LED small charging indicator’s small leg to the negative wire and connect them both to the charger connector. Connect the resistor to LED positive which is the long leg and the other end to charging positive. Cut off the excess wires after soldering. Now you have a rechargeable LED light made from used laptop batteries which can be charged using a 5-volt charger.

The first step is to demolish the plastic core that surrounds the cells. Remove any tapes, wires, ribbons, or sheets that are attached to the cells. Desolder all of the wires on the cells from the control circuit and disconnect the three, two-cell pack’s series connection.

Set the lab bench power supply to the recommended charging voltage, which is normally 4.2 volts, but start the charging with a low constant current of only 600 milli AMPs after the battery pack is complete. After a few hours, you can boost the current to 1 to 2 AMPs, which will charge the pack for about 4 hours without heating up.

You can put these cells in a decent-looking case or cover it all with decorative tape and now you have a 12 volts power supply made from an old laptop battery.

How to Dispose of a Laptop Battery?

Hani is a technology professional, focused on programming and consumer electronic devices. He loves digging into the technical details while reviewing hardware and software for everyday users.