SATA stands for Serial Advanced Technology Attachment(ATA), is an IDE standard which gets released first in 2001 for connecting devices like hard drives, motherboards, and optical drives.

This term basically refers to the different types of cables and connections following this standard. 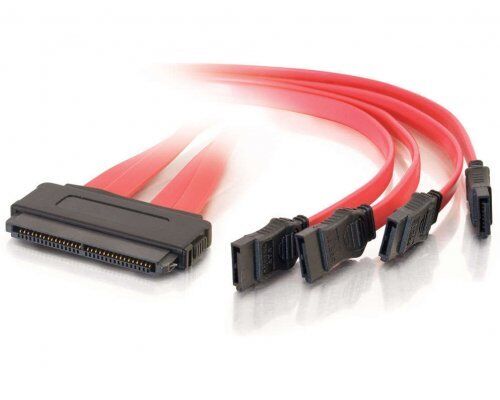 Parallel ATA is replaced by SATA(Serial ATA) as a standard for connecting storage devices in the computer. Storage devices by SATA can transmit data to and from all over the computer and much faster than it’s similar PATA devices.

Remember that PATA is sometimes referred to as an IDE. If you face SATA being used as an opposite of IDE that means connections or SATA and PATA cables are being discussed.

As compared to PATA, Serial ATA costs cheaper cable benefits and the ability to hot-swap storage devices. Hot swaps refer to replacing the devices without turning off the entire system. In the case of PATA first, you need to turn off the computer to replace the hard drive. If SATA supports hot-swapping then the devices that will use it must be capable to support the hot-swap Operating System.

As compared to fat PATA ribbon cables the SATA cables are much smaller and easier to manage as they don’t require much space and it’s easy to tie them up easily if need be. Also, the thinner design of SATA cables allows better airflow inside the computer case.

As already told above the SATA transfer speeds are way much faster than PATA. PATA devices offer the fastest transfer speed of 133MB/s and the speeds supported by SATA is 187.5 MB to 1,969 MB/s. And the PATA cable’s length can be a maximum of 18-inches(1.5 feet).

SATA cables can be 1 meter or 3.3 feet in length. But SATA only allows attaching one device with it while PATA data cable allows attaching two devices. Few of the OS doesn’t support SATA devices, like an older version of Windows 95 and 98. But we have left those versions far away behind so it’s not a big deal today with the latest Windows operating systems.

Another downside of SATA hard drives is that before the computer begins writing and reading the data they require a special device driver for working.

More About SATA Cables and Connectors

SATA is a 7 pin and long cable with thin and flat ends on both sides. One end labeled as SATA plugs into a port of the motherboard, and the other into the back of a storage device like a SATA hard drive. You can also use External Hard Drives with SATA connections, and the hard drive itself has to have a SATA connection also. That’s called eSATA. It works in a way like an external hard drive attaches to the eSATA connection at the computer back next to the other things like a network cable, monitor, and USB ports. Inside the computer, the motherboard contains the same internal SATA connection like hard drive was fixed inside the case. Like internal SATA drives, eSATA drives are also hot-swappable.

Note: You may see many computers come with no pre-installed SATA connections on the back of the case. Whereas, The bracket is available cheaply to buy. But a downside is that SATA external hard drives only transfer data not the power. This means that, unlike those external USB drives, eSATA drives may need a power adapter, like plugins into a wall.

There are several adapters available to purchase if you want to convert the older cable to SATA or SATA into any other connection type.

Let’s say you have a USB connection and want to use your SATA drive through that, like to wipe a hard drive, browse the data, or backup the files, you can choose SATA to USB adapter. Also, you can get a SATA/PATA/IDE Drive to USB adapter Converter from Amazon.

If your power supply doesn’t provide a 15-pin cable connection then you can also get Molex Converters to power up the internal SATA hard drive. These capable adapters are much inexpensive, like Micro SATA cables.

External Hard Drive Tasks that can be helpful for you are