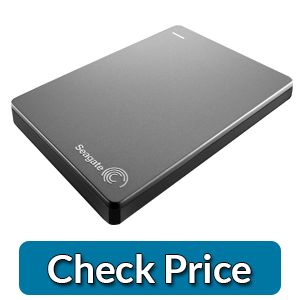 As time goes, the advanced and latest technology is replacing the older one. But in the case of Seagate Backup Plus review, there is no advanced drive available to beat it because the features and performance it gives are still not beatable by any other drive.

Seagate Backup Plus is itself the latest version of Seagate Go Flex Family. To understand its performance you need to understand what do we mean by backup Plus the reason is that Seagate is not limited to do local backups but keeps the backup of online dates like Facebook profiles and WhatsApp.

Seagate is also available in the desktop version, but the portable version is handy and easy to keep with you wherever you go. This new little beast can boast a huge amount of storage space and along with it gives the winged performance. Seagate Backup Plus 5tb gives a jaw-dropping speed while keeping more than a thousand movies, and countless songs, images, any other media or files.

This little wonder is compact and gives fast throughput, and it’s worth paying for this. Seagate is a popular brand in the market offering high-quality hard drive but if you have get one of their hard drives then it’s time to make it usable because any hard drive will be only used in your computer when it’s partitioned. Learn how to partition a hard drive in our detailed guide.

Along with speed and performance, it shares the same applications of backup which are used in other Seagate drives. The software is also included which it makes capable of working with PC and MAC without reformatting. Seagate Backup Plus is available in four different storage capacities like 5TB, 4TB, 3TB, 2TB. Giving great speed high performance, efficiency and portability make it the best external hard drive in the market.

The Backup Plus is designed on the concept of its ancestor Seagate Go Flex Family. As already stated that it comes in two parts the hard drive itself and the adaptor. The drive is 2.5-inch SATA internal hard drive which is encircled by the plastic chassis that has a small space on a side to impart the standard SATA female connector of the internal hard drive. The adapter contains the male SATA connector and a USB 3.0 port. Both of these combined form a portable hard drive.

The drive measures 0.5 x 3 x 4.75 (HWD) and available in silver, blue and red color. It’s developed totally out of plastic, and brushed faux-metallic finish on the lid gives it the primary visual flourish and having a Seagate logo on the right side. Backup Plus weighs 5.4 to 5.9 ounces with sleek design and portable dimensions it can easily slip into your pocket or into the laptop bag without any noticeable heft.

A Mini-USB 3.0 cable is also included with the drive, which serves for both purposes as a data and a power cable. If you wanted to use the drive for FireWire, eSATA, and Thunderbolt connection types you need to purchase other adapters. In case you are Go Flex user, you may be using these adapters already because these adapters are also compatible with the Seagate Backup Plus. Oppositely, USB adapter of Seagate Backup Plus can also be used with Go Flex Portable Drives as well as other 2.5-inch standard internal hard drives of solid state drives.

The new Seagate Backup Plus Fast comes preformatted for NTFS and for MAC users it can be reformatted. The only flaw in this regard is the “Protection” feature of Backup Dashboard, not being compatible with MAC. Time Machine can be used to perform the same task for the MAC users, so that’s not a big issue. MAC users can still enjoy the generous set of features of Seagate Backup Plus.

Point to be noted here is that to use the GoFlex with any Windows computer you need to format it into the NTFS file system. But for the drive, you have a customized version of Paragon NTFS for MAC. This software helps MACs running the OS x 10.4. Keep in mind a thing that this software is not designed to work with any other external drives except the Seagate Backup Plus itself.

The drive can be reformatted into FAT32 if there is a need to use it between two platforms without the use of the software. But the drive will be limited to hold only the data of capacity 4GB (Gigabytes). The biggest advancement that makes Seagate Backup Plus separates from the previous GoFlex Family is the existence of Dashboard Agent Software, Whose installer is installed in the drive. After installation, this little piece of software gives you precious ways to do backups.

The new Seagate Backup Plus is one of the fastest and generous capacity external hard drives we’ve tested. This drive performance was very good, and it earned 7,504 points on the PCMark05 and 1985 points in the PCMark7 test.This is amazingly faster than the wd my passport ultra. With this great speed, your video work and data transfer will be a lot easier, and it’s a positive edge of Seagate Backup Plus.

So the final words for the Seagate Backup Plus are that this tiny wonder that is capable of doing the data transfer tasks with great speed having the large-storage capacity than other drives in the market sleek and slim design, ability to provide efficient results and cheap price per gigabyte compared with other drives earns the title of best storage drive on our list.
Pros
Seagate Backup Plus is flexible Fast Transfer Speed Nice and sleek design Backup Software availability
Cons
Dashboard doesn’t allow to keep multiple versions of data Short 2 years warranty
More Drives
Seagate Backup Plus Portable Review (1,2,3,4,5 TB) Updated