Does your Chromebook lose its battery a lot? Are you tired of charging your Chromebook again and again? If your answer is a yes then you are at the right place as in this article, we will tell you How to extend Chromebook battery life.

There might be many reasons why your Chromebook drains battery very soon. It might be because you are overusing your Chromebook then it’s usage capacity. Or some of your applications may be very huge hence, they eat up the battery of your Chromebook. However, you shouldn’t worry anymore as today we will tell you some tips and tricks by you which will help you to extend Chromebook battery life.

Most of the Chromebook have lithium-ion batteries which can be recharged. These batteries are very common in electrical appliances and most of your laptops and tablets have the same batteries

What are the reasons behind the Chromebook’s battery dying quickly?

One of the major reasons is that you are using your Chromebook more than its potential. Chromebooks tend to have smaller software than laptops and if you will be using your Chromebook’s as a laptop then it is obvious that the battery will die quickly. If this is not so and still the battery dies quickly then I would recommend you to take it to an expert as there might be a chance that your battery is not original or its pirated.

The higher the screen brightness the more the Chromebook eats up the battery. To save Chromebook battery you should adjust the brightness to the lowest levels which are comfortable with your eyes. However, you should always remember if you work on a low brightness for a long time, you may harm your eye-sight. You can fix your brightness by pressing FN key and lowering or increasing it by pressing up and down key. In case you don’t want to do it you can also go to settings and adjust the brightness as per your choice.

Disable Bluetooth if not in use 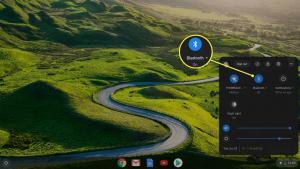 Most people believe that charging their Chromebook’s to 100% will make their battery life longer, however, this is not true. Most of the batteries are stable when they are in between 80-20% and when the battery is above 80% its usage shifts to protecting the battery from expansion and damage. Mostly, the battery life is rated in cycles which is that if you keep your charge in between 20-80% your battery will automatically be doubled.

If your battery will be below 20% or if it reaches 0% then your Chromebook might shut down permanently as once the battery reaches 0 it starts taking energy from the machinery inside your Chromebook hence, this causes irreparable damages. We completely understand how difficult it might be to keep your Chromebook in this battery range but this effort is very important for saving battery life.

Charge your Chromebook during updates

It is very important to plug in your Chromebooks when the Chrome OS updates in the background. This is because when the software is updating it eats up a lot of battery hence, your battery drains early. Plugging in your Chromebooks during the updates will extend its battery life and will save the CPU resources. Therefore, whenever you update your Chromebook’s software keep it on charge.

The longer your screen stays active the earlier the battery drains out. Often users don’t want to shut down their Chromebook’s as they are in the middle of something or their files and documents are unsaved. If this is so then you can lock the screen as in this way your Chromebook will eat less battery and your battery will last longer.

The last and the most important thing that you can do to extend the battery of your Chromebook is to turn it off when not used for a long time.  In order to power off your Chromebook you have to press the power button until the screen locks and then you need to keep on pressing it until the Chromebook powers off. In this way your Chromebook won’t be losing its battery when not in use.

This may seem a strange tip but it’s pretty useful when your battery is on its last stage. An open WiFi drains battery as it is supporting open tabs in your Google. Now you might be wondering how we will work if we turn off the WiFi so, most of the Google services do work offline like Google Docs, Google Drive and Email. To turn off the WiFi you will have to open the taskbar and click the WiFi option. Then you can use the slider to turn off the WiFi.

In this article, we have listed the 10 ways by which you can extend Chromebook battery life. All these methods are tried and tested and they will help you in extending your battery life. However, if your battery still doesn’t last long we would advise you to take it to a professional as there might be something wrong with the battery. We hope that this article has solved all your queries. Different Chromebook’s have different battery life therefore, before implementing any of the above tips you should know that which battery does your Chromebook have.